What are Candlestick Charts?

A candlestick chart is a method of visually representing price dynamics in financial assets over time. Candlestick charts are composed of multiple data structures called candlesticks that indicate the opening, closing, high and low price of an asset over set timeframes (eg. hour, day) within the analyzed period.

One of the most common tools in technical analysis, candlestick charts can be used to determine the future price movement of an asset based on historical data.

Candlesticks derive their name from their visual resemblance to wax candles as each candlestick bar is composed of a wide ‘body’ and two thinner ‘wicks’.

Candlestick charts are thought to have been invented in Japan in the 18th century by a rice trader, Munehisa Honma. Steve Nison, a renowned author and speaker,  is widely credited with introducing candlestick charts to the Western world in his book “Japanese Candlestick Charting Techniques” published in 1991.

How to Read Candlestick Charts

The color of the body corresponds to the direction of the asset’s price movement.  The green or white (unfilled) candlestick’s body indicates that the price of the last trade was higher than the price of the first one. The red or black (filled) body points to the opposite scenario.

Candlestick charts show the direction of price movement over time and enable traders to assess market sentiment. In candlestick charts each bar captures the four most important data points for a given period: open, high, low and close.

As with candlestick charts, bar charts offer information on opening, high, low and closing prices for a specified session. Via a different visual representation a bar chart communicates the same breadth of data as a candlestick chart.

In bar charts the vertical line in an individual price bar represents the price range between the highest and lowest traded values. The left and right horizontal lines show the opening and closing prices, respectively.

In candlestick charts emphasis is placed on ease of visual perception of the direction of  asset price movement due to color coding of the thicker real bodies, while bar charts excel at highlighting the difference between opening and closing prices.

Bearish candlestick patterns represent weakness in the market. They are likely to occur when an uptrend is ready to reverse or a downtrend is expected to continue. In complex candlestick patterns bearish trends are in most cases identified by red candles following the green ones. In simple patterns a single red candle with varying body and wick lengths can denote a bearish trend.

Bullish candlestick patterns embody the possible imminent reversal of a bearish trend or continuation of an uptrend.

The most recognizable one-candle bullish signals are “hammer” and “doji”. Some common complex bullish patterns include the “morning star”, “three white soldiers” and “bullish engulfing” structures.

Candlestick charts can display the impact of investor sentiment on asset prices on the market. They are used in technical analysis to determine the best entry or exit points for trades.

This candlestick pattern indicates the beginning of a bullish trend and serves as a  signal for investors to enter a long position.

Single candlestick patterns are formed by just one candle. 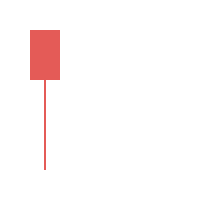 The “hanging man” pattern appears at the top of an uptrend. With a small body, an almost nonexistent upper wick and a long lower wick it serves to signal the reversal of a bullish trend and represents a selling opportunity. 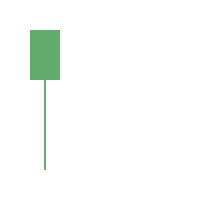 “Hammer” is a bullish candlestick pattern. It indicates that a downtrend may have reached its bottom and that prices are about to reverse upwards. “Hammer” signals a buying opportunity. 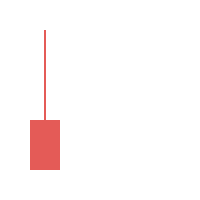 “Shooting star” is a bearish pattern that occurs at the top of an uptrend. It has a long upper shadow, little or no lower shadow and a small real body near the lowest value. This type of candlestick appears when during the designated time period an asset advances significantly but still closes near the starting price. “Shooting star” serves to indicate that an uptrend is about to conclude. 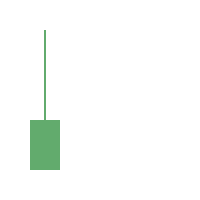 “Inverted hammer” appears mainly at the end of a downtrend and signals its possible future reversal. The candlestick usually has a small body at the bottom, an almost non-existent lower wick and a long upper shadow. The long upper wick indicates that buyers drove prices up at some point during the specified period but were faced with selling pressure which moved prices back down. 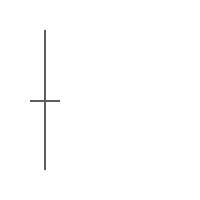 A doji candlestick forms when an asset's opening and closing prices are effectively the same for a given time period. When looked at separately it generally signals that neither buyers nor sellers are gaining. A “doji” is a sign of indecision and is most effective when analyzed as part of a complex pattern. 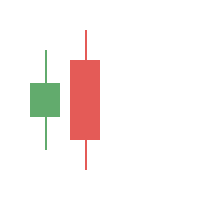 The “bearish engulfing” pattern emerges in an uptrend when sellers outnumber buyers. It predicts a possible incoming decline in an asset’s price. The pattern includes a long red candle body engulfing a small green candle body. 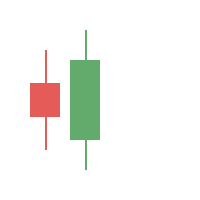 The “bullish engulfing” pattern appears at the bottom of a downtrend and indicates a surge in buying pressure. It often serves as a signal of inbound trend reversal as more buyers come into the market to drive prices up. The pattern consists of a large-body green candle engulfing a small-body red candle. 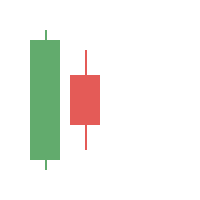 A “Bearish harami” pattern suggests that prices may soon reverse to the downside. It is constructed of a bullish candle with a large body followed by a small bearish candle. The opening and closing prices of the second candle are generally contained within the body of the first candle. “Bearish Harami” is largely used as a warning sign rather than a call to action. 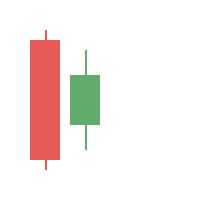 “Bullish Harami” forms in a bear trend and predicts an imminent market rise. It generally describes a small growth in price, which could be continued in future. “Bullish Harami” may represent a sign for investors to enter a long position. Bullish Harami includes a large-body bearish candle next to a smaller bullish candle. 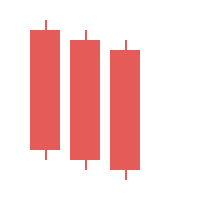 “Three black crows” consists of three long black candlesticks with successively lower closing prices. In “three black crows” the closes are near to or at the lows. It is considered an uptrend reversal or a downtrend continuation signal. 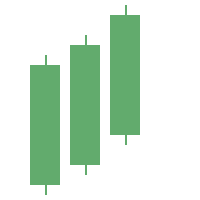 “Three white soldiers” is constructed out of three large white candles with small wicks and consistently higher closes. When the pattern appears amid a bearish trend it is interpreted as a bottom reversal sign.

To share your queries and other feedback, send us an email at [email protected] or feel free to contact us via Telegram, Twitter or even Discord!

How do you read a candlestick chart?

A candlestick consists of a thicker part called the “real body” and two wicks: top and bottom. The real body shows the range between the opening and closing prices for the designated time period. The top wick points out an asset’s highest price for the session, the bottom — the lowest. The green color of the candle’s body is an indicator of the closing price being higher than the open. A red candle body signifies the opposite.

What does a candlestick chart show?

Which candlestick pattern is most reliable?

Some patterns may work better than others in various scenarios. It is not guaranteed that a particular type of candlestick pattern will always perform flawlessly. Some of the patterns that are known to show reliable results include:

What are the most common candlestick patterns?

Some of the most common candlestick patterns are “hammer”, “engulfing pattern”, “three white soldiers” and “morning star”.

Looking to get started in crypto trading?

Try TabTrader on mobile or web!